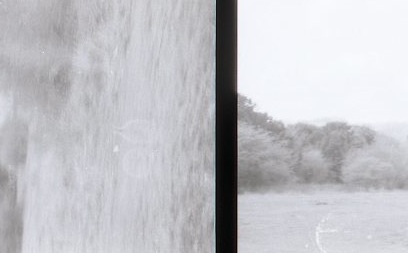 What fell through the air let set the contemplation in a man’s eyes. The heavy lean upon ‘nearly home’; or the thought of it at least. An unspoken weathering of the practicalities of the day or the larger ideas of what it could have been: set aside like a lukewarm tea that can be drunk later, but won’t be. The man’s oversized jacket told precious little about his welfare or about what drove him every day but enough that what lingered somewhere between his heart and his head needed to be settled. It foams from his ears and leaks from his eyes. Finding myself lost in the intensity of his gaze, I watched what he was watching in the hope that it gave answers.

Drops amassed in puddles and poured themselves into the evening; liquidised facets of all those waiting. Everything stood still until the speakerphone crackled.